Local company supervisors attended a seminar in San Luis Obispo Thursday morning on how to prevent harassment of any kind in the workplace. 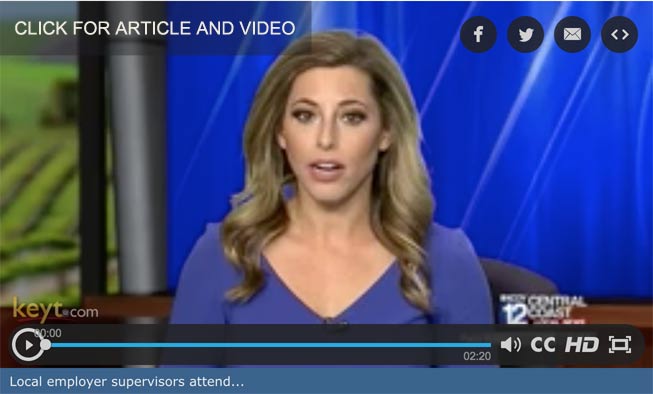 The seminar comes as more and more high profile people in the country are coming under unprecedented scrutiny and penalty for sexual harassment and inappropriate behavior.

"It is different than at any time I've ever seen because of the prominent names that are falling left and right", said seminar host and employment law attorney Jon Light, "because women, and its almost always women, are now becoming less afraid to come forward, they realize they're not going to be blackballed, or their careers ruined or they're going to get fired, there's safety in numbers is kind of a simplistic way to look at it, and its really true because the scariest thing any employee is going to do, especially a woman, is to come forward and complain about harassment in the workplace."

Part of the goal of the seminar is to educate front-line supervisors in the workplace on issues involving things like hostile work environment and sexual harassment and what to do if there is a complaint.

These local supervisors were told how to foster a workplace environment where any employee feels comfortable coming forward to make a complaint without fear or consequence.

"To address things immediately", said seminar attendee Brandee Puett, "also making sure your staff feels safe, to share things with you and that you're providing, you're kind of setting that tone and the environment that you're keeping it professional."

Career employment law attorneys like Jon Light say this is a transformational time in the American workplace.

"Its pretty much a man's world as far as harassment, and I tell guys, you're in a difficult situation, and if you do something now, you're going to get fired, companies are not going to put up with this anymore", Light said, "if you look at these powerful guys that are getting fired, its going to happen to you too, you're nothing special, you better beware, and people are going to come out of the woodwork and I'm sure there's a lot of guys looking over their shoulder right now, and wow that thing I did two years ago or five years ago, I can't be sued for it because its outside the statute, but it can certainly ruin my career, ruin my life and ruin a bunch of things, so there's a bunch of nervous guys out there I'm betting."